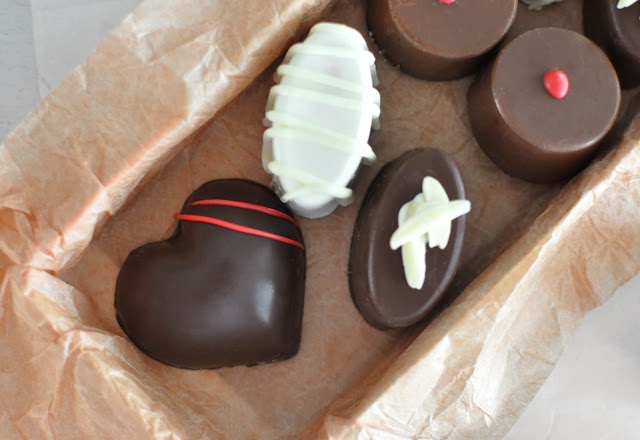 This year my husband and I said no gifts for Valentine’s Day. Again. Valentine’s just isn’t that big of a deal for me. It isn’t that I despise it like some people who say that they show they love, appreciation and affection every day of the year, or some bad Valentine’s Day memory (I’ve heard so many), it’s just that I like to celebrate it with Chris by making a nice dinner or going out for one at some nice local place, no gifts needed. Don’t we do plenty of those for Christmas, birthdays and everything else in between?

My husband never felt very comfortable with this, I almost feel like he thinks it’s a trick or something, so he still always comes home with at least flowers and a box of chocolates, sweetheart that he is, and I always feel awful for not doing something as well. So this year I made him a box of chocolates. See how I underlined that? Because that’s how awesome I am. I win, end of story. That is how good they turned out, and I improvised the whole thing. Yaay, success.

This was easy. It was fun. And I thought of him the whole time, my older son even helped me some, though I had to make a separate station for him without the ‘grown up flavors”. These are so great and customizable, I feel like never buying a box of chocolates again! 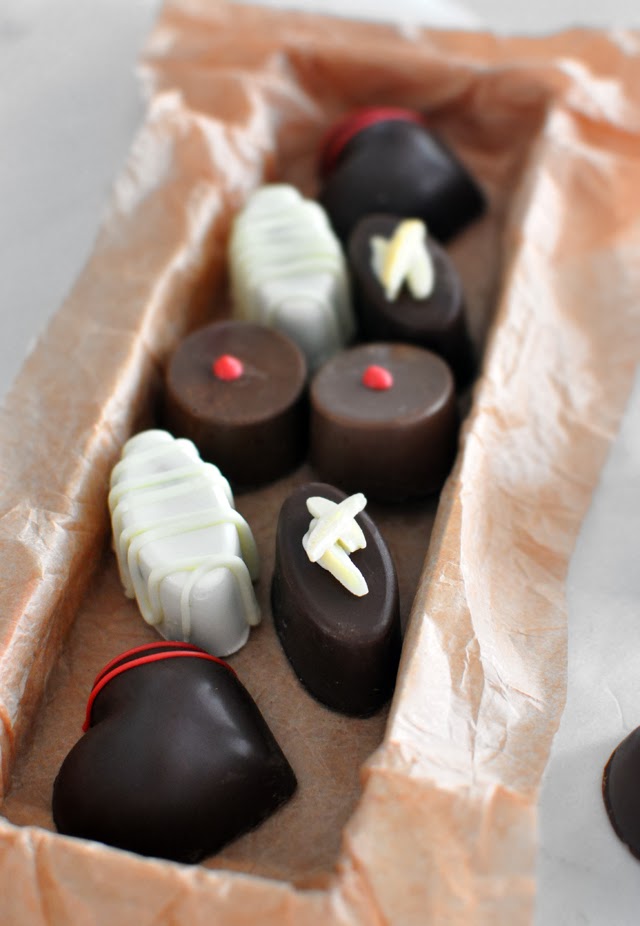 I didn’t measure anything when making these, I worked in small batches and just kept a pot with hot heavy cream next to me so I could add it to my chocolate as needed to make the ganache filling.  The outsides of the candy were just melted chocolates using the 30 second microwave increments and then brushed on the chocolate molds. I let it set in the fridge for five minutes and then I applied a second layer and let them sit for 10 more minutes in the fridge before filling them. When I filled them I put them in the freezer for about half an hour to an hour and then I used the same melted chocolate on the top to close them up. Back in the freezer for an hour and then I just popped them out of the molds and decorated with more melted chocolate.

Dark Chocolate on the outside, white chocolate ganache with Baileys filling (to fill four hearts from the photo underneath, I used about 1/4 cup of the ganache mixed with 1 1/2 tsp of Baileys.)

Dark Chocolate on the outside, dark chocolate ganache with Southern Comfort filling (to fill four hearts from the photo underneath, I used about 1/4 cup of the ganache mixed with 1 1/2 tsp of Southern Comfort.) 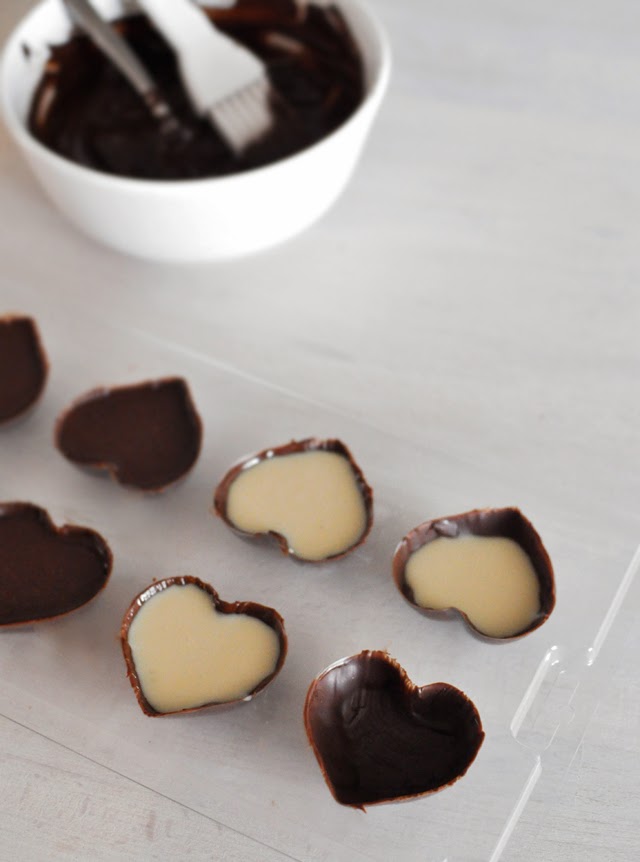 Milk Chocolate on the outside, maraschino cherry  soaked in Maraschino on the inside (I have a bottle of Maraschino that I brought back from Croatia, we make a lot of desserts with it but I’m not sure if something like it is readily available in liquor stores)
Also, I ran out of dark chocolate here, so I used regular semi-sweet chocolate. I prefer dark one for this, but it entirely depends on what you like. 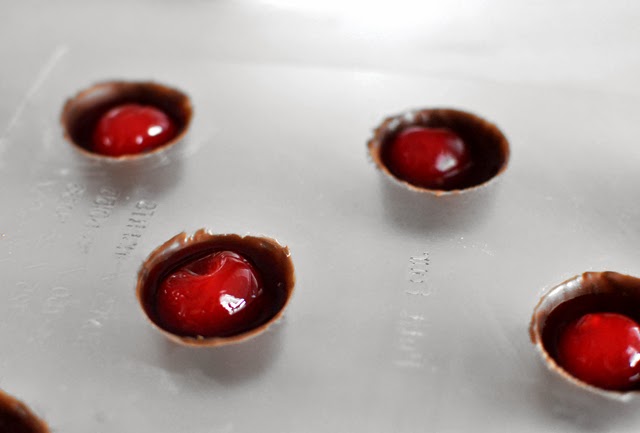 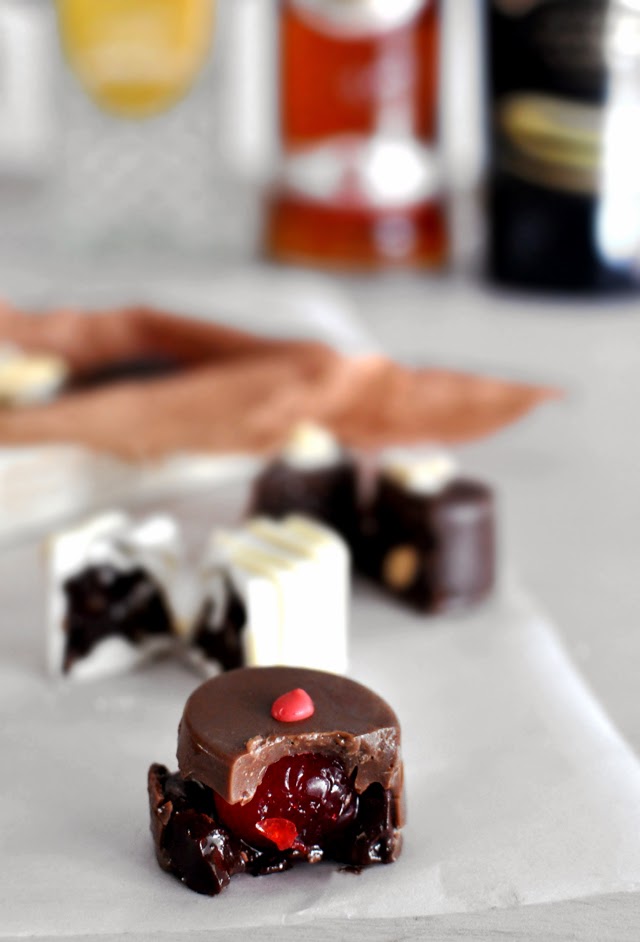 Almond Bliss:
Dark Chocolate on the outside, dark chocolate ganache filling with a whole cinnamon roasted almond in the center. (This mold was smaller so I got about 8 candies from 1/4 cup of ganache) 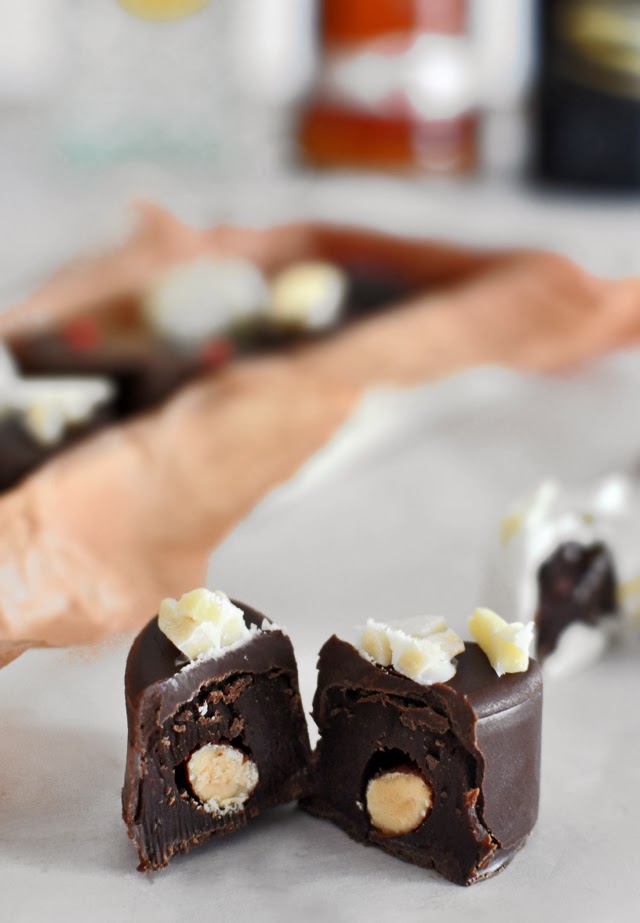 Kinder Suprise:
White Chocolate on the outside, dark chocolate ganache with small pieces of macadamia nuts on the inside. 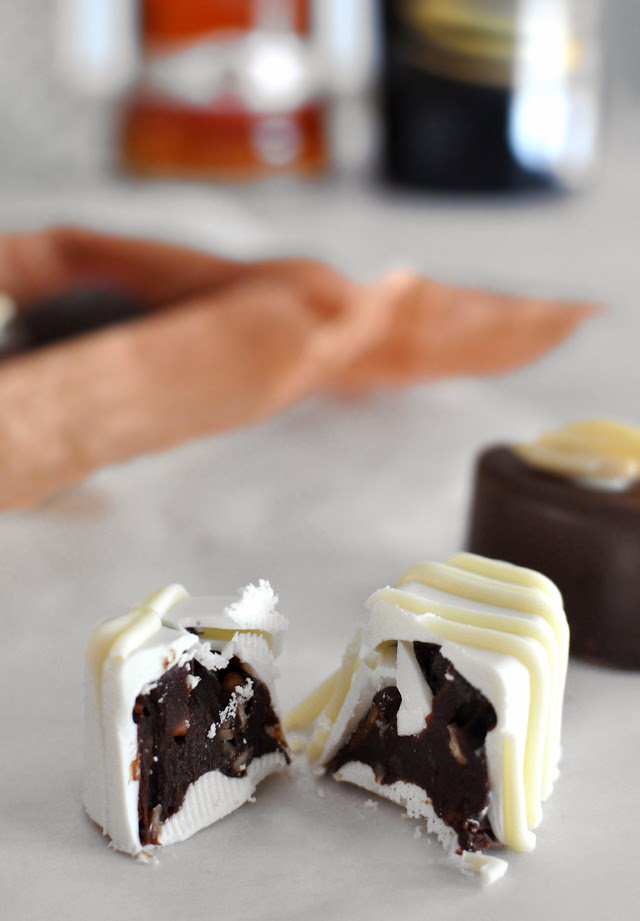 I had a perfect box for these chocolates that I decorated a bit more with some craft paper and personalized it just for my husband, on the inside I put some tissue paper and then wrapped it all nice. I can’t wait for him to see it, and yes, I tried each flavor and I can’t decide what is my favorite. Maybe he will share some with me on Friday?