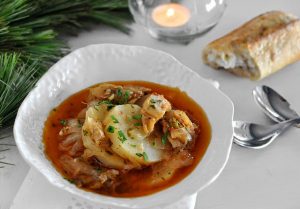 Baccala is dried and salted cod fish. In Croatia it is just dried so if you were to find it like that, you would be free to season it more than if it was also salted. In both cases you need to chop it in large chunks and let it sit in water for a few days before cooking it. In the dry version it takes about three days and you change the water every day. In salted version you put it in water the morning of day before, and change the water again the night before you are going to cook it. And then you season very carefully. Sometimes it will be salty enough on its own, sometimes it will need a bit of salt.
Brodetto is pretty much a broth, so you can think of this as a fish soup/stew, but no one in Croatia thinks of it like that. It is a dish in its own category. It’s a specialty and a traditional meal for Christmas Eve in southern part of Croatia, Dalmatia. There is a lot of Italian influence in our cuisine and this dish is made in Italy as well, so there it gets its name in Croatia as well “Bakalar na Brudet”.

Cut the Baccala fish into two to 3 inch long pieces and put them in a bowl with water and cover it. Change the water every 8 hours, three times.
Peel the potatoes and cut them into 1/4 to 1/2 inch thick slices, Slice the onions, mince the garlic and chop the parsley.

In a large pot start assembling your brodetto. On the bottom put a layer of onions, then a layer of potatoes, layer of fish and crush a little bit of tomatoes and tomato juice on top. Do this until you are all done and then on top of it put your garlic and parsley, salt and pepper and bouillons.
Pour the wine and olive oil on the top and then add some water to about and inch from the top of the food. Cook on medium until the potatoes are done, for about 30 to 45 minutes. Make sure to serve some great bread on the side because the broth is to die for!
This is even better the next day and it freezes well.